Trail running – The use of poles: Are they a help or a hindrance?

Ultra-running has kind of become my thing over the last year, more through organic growth rather than an intention, and with the hills getting bigger and distances getting longer I wondered what all these people around me were doing with poles!? So running with poles is a thing and although you may write them off as cheating or gaining an unfair advantage, don’t knock it until you have tried it. I am now a massive fan and convert after recently trying them in the Mozart 100, a 103km ultra in the Austrian mountains, with 4500m of elevation. Without them it would have been an ugly affair. Also, if it’s allowed in the rules and regs of the race, which it is in most mountainous ultras, why not use the kit allowed to gain the most benefit within the race. 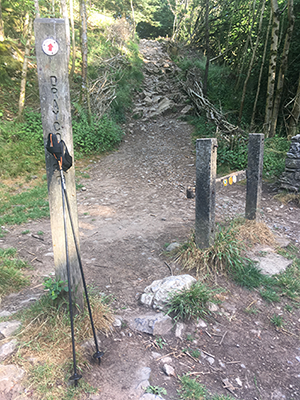 After a bit of research into the potential benefits, reading blogs and articles about how they are like Marmite, you love them or hate them, I thought it was worth a try. I have always known of the benefits of hiking with poles. They keep you more upright, therefore reducing the load on the quads and calves giving you more power from the glutes as well as off-loading the lower body and utilising the upper body. Some articles claimed a 40% increase in upper body use whilst using poles which is a huge aid to the lower body.

When my friend who I ran the Mozart 100 with was suffering from a knee issue leading into the race it seemed to make sense to use poles a bit earlier than intended. I had planned to practice running with them leading up to the Arc50, a 50 mile ultra in Feb when ground conditions would be treacherous and very hilly on the Cornish coast path. I decided to invest in a pair, not lightly though as they come at a cost! Made from carbon fiber or aluminium they are designed to fold up smaller for ease of packing away and also to save weight when running/carrying them. This makes them expensive £80+.

I bought a pair of Mountain King Trail Blaze Skyrunner Trail Poles off eBay but not long before realising I couldn’t take them on the plane in my hand luggage. So, I ended using normal light weight trekking poles borrowed from a client’s client who lived in Salzburg. Amazingly they do give you a lot of extra go, even on the level. They definitely take some getting used to but my friend wouldn’t have made it around the 103km without them and I would have been in a lot of pain! I found on the flats you could use them in an alternating swing pattern, and the same on ascents however you could double pole to give a big power uphill walking or running.  I found the double pole most beneficial downhill to help reduce the load and impact also stabilising yourself on uneven/slippery descents. They definitely take some getting used to and wouldn’t be for everyone, but I was sold on them in 5-10minutes of using them, and that was just a normal light weight walking pole, not even a specific running pole.  However, they do throw up a few logistical things to consider like where to carry them, feeding on the go etc.

Hopefully this gives you a brief overview of a few things I experienced in researching, buying and using poles in the last month or so within my silly Ultras. For me it will be an essential bit of kit, first to be packed in my bag alongside my toilet roll, whistle and phone.